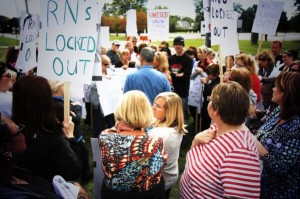 Youngstown, Ohio – Nurses at Northside Medical Center returned to the picket line yesterday after some were locked out following a 24-hour strike by over 400 nurses. According to a report by 21 News, the hospital explained that some nurses were not allowed to return to work immediately because temporary replacement nurses were hired for a 3-day period. Lockouts are common following 1-day nurse strikes as hospitals are often unable to find replacement nurses who will agree to work for only one shift.

The 485 nurses at ValleyCare’s Northside Medical Center in Youngstown, Ohio have been working without a contract since July 2012. Earlier this month, United States Senator Sherrod Brown issued a statement urging the hospital and the union to come to an agreement.

“I urge ValleyCare to work towards reaching a fair and equitable agreement with more than 400 of its nurses,” Brown said. “Mahoning Valley workers deserve good wages and working conditions. And Mahoning Valley citizens deserve high quality health care. A negotiated and ratified contract will benefit the workers and their families, the hospital management, and the local community. That is why I gladly offer my assistance so that both sides can reach an agreement.”

Nurse strikes are often controversial due to concerns about the risks to patient safety.  However, strikes are usually announced well in advance to give the hospital enough time to hire temporary replacement nurses.  Per diem and travel nurses who care for patients during nurse strikes earn above-average pay and are usually reimbursed for housing and travel costs.  According to a press release by the Youngstown General Duty Nurses Association, the hospital is paying the replacement nurses $55 per hour which is well above the median pay rate of $28 per hour for nurses in Ohio and the reported hourly pay rate for nurses at Northside (which starts at $23.88 and tops out at $29.88).