Nurse strikes across the nation

In the past two weeks, there have been nurse strikes at hospitals in several states including Pennsylvania, California, Washington and Connecticut. 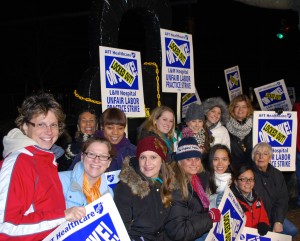 The day before Thanksgiving, over 800 nurses, therapists and technicians at Lawrence & Memorial Hospital in New London, Connecticut went on strike. The strike ended on November 30th but striking nurses have been locked out and are not expected to be allowed to return to work until a new contract is ratified. Contract negotiations resume on November 10th. This is the first strike by nurses at Lawrence & Memorial Hospital. In November 2009, unions representing RNs, LPNs and technicians at the hospital voted to authorize a strike but the strike was averted after a resolution was reached.

AFT Healthcare in Connecticut has recently started airing a local television ad campaign titled “I am L&M” to raise public awareness of its positions. 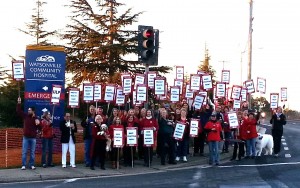 Nurses on strike at Watsonville Community Hospital in Watsonville, California 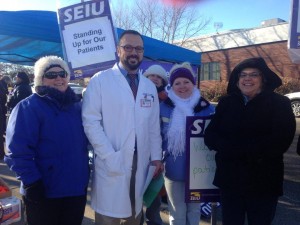 Nurses on strike in Spokane, Washington.

On December 4th, nearly 1000 registered nurses and hospital workers at Valley Hospital and Deaconess Medical Center in Spokane, Washington began a 24-hour strike. Strikers at Deaconess Medical Center were allowed to return to work at the end of the strike while nurses at Valley Hospital were temporarily locked out until the contracts for temporary replacement nurses ended on December 7th.