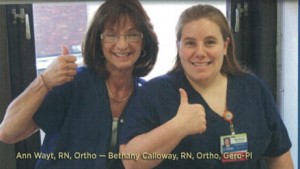 The case began in July 2013 when the National Labor Relations Board (NLRB) filed a petition for injunctive relief to enforce an administrative law ruling by Judge Arthur Amchan that Affinity Medical Center, an affiliate of the nation’s largest hospital chain, Tennessee-based Community Health Systems, violated labor law by refusing to recognize or bargain with the union after it won an August 2012 representation election and by firing long-time registered nurse and union supporter Ann Wayt on “pretextual grounds” in retaliation for her union organizing activity.

Registered nurse Ann Wayt worked at Affinity Medical Center for more than 25 years and was one of the facility’s most respected and recognized nurses. According to NLRB attorney Sharlee Cendrosky, in 2008 Wayt received both the Affinity Medical Center Nurse Excellence Award and the prestigious Cameos of Caring award from the University of Akron College of Nursing. In 2011, Affinity Medical Center opened a new Orthopaedic Unit and selected Wayt to work in the unit in part due to her reputation as an outstanding nurse. However, the hospital administration’s attitude towards Wayt reportedly changed significantly when she became an enthusiastic union supporter and organizer whose photograph appeared prominently in union brochures and promotional material encouraging registered nurses at the hospital to vote to be represented by a union. On the day before the union election, hospital administrators suddenly accused her of providing inadequate patient care and falsifying patient records. She was subsequently fired and the hospital reported her to the Ohio Board of Nursing for disciplinary action. At an April 2013 administrative law hearing, NLRB attorney Sharlee Cendrosky argued that the stated reasons for Wayt’s termination were not supported by the evidence and that the firing and report to the nursing board were done in retaliation for her union support and intended to discourage her fellow nurses from supporting or voting for the union:

This was meant to send a message to all the nurses at the hospital that supported the union, that if you continue to support this union that the hospital will not recognize, you will risk the one thing that allows you to practice as a nurse: your license.

After learning on Friday that the hospital had been ordered by a federal judge to reinstate Wayt, retract
its report to the Ohio Board of Nursing and expunge any reference to the disciplinary action against her from her personnel file, nurses at Affinity Medical Center celebrated and praised the ruling.

“Finally, a step in the right direction, justice for Ann and an opportunity to start contract talks. The federal law has spoken,” said Tamara Wiseman, a Medical Surgical/Telemetry RN.

“I will be so happy to have Ann back at the hospital. She is so respected at the hospital as a fabulous nurse and role model for so many at Affinity,” said mental health RN Michelle Canfora.

“CHS may think they are above the law, but this order sends a clear message. We look forward to having our sister Ann back and moving forward to contract negotiations that will improve patient care conditions at Affinity,” said Bob McKinney, Medical Surgical/Telemetry RN.

“Thank you Ann for staying strong! You have given us courage. We are so pleased to see justice prevail for Ann and all Affinity RNs,” said Intensive Care Unit RN Sarah Falanga.

Affinity Medical Center, which has strongly disputed the complaints by the union and the position of the National Labor Relations Board throughout the lengthy litigation process has not yet determined whether it will comply with the order or consider appealing it. In a story published on Sunday, reporter Christina McCune of Massillon’s The Independent newspaper reported that Susan Koosh, vice president of Marketing and Community Relations at Affinity Medical Center, stated that the hospital has received the ruling and is “taking time to review the decision and to consider our next steps.”