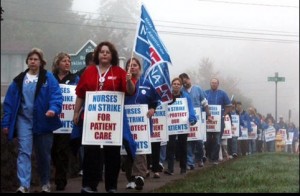 After more than two years and 42 negotiation sessions, 200 nurses at Baystate Franklin Medical Center in Massachusetts have been unable to reach an agreement on a new contract.  On Wednesday, the hospital declared that negotiations in its 28-month labor dispute were at an impasse and that it planned to implement its contract proposal without agreement from the nurses.  The Massachusetts Nurses Association, which represents 200 nurses at the facility, characterized the declaration as an outrage and illegal and announced it planned to file additional complaints with the National Labor Relations Board (NLRB).   A similar 2012 attempt by Baystate Health to declare an impasse in a labor dispute at another Massachusetts facility resulted in the NLRB forcing it to rescind the declaration and continue negotiations.

“We are appalled at Baystate’s willful effort to flaunt the law, and their attempt to deprive nurses of their right to negotiate a fair agreement that is in the best interests of the nurses and the patients we work so hard to care for every day,” said Linda Judd, RN, a longtime nurse at the facility and co-chair of the nurses local bargaining unit of the Massachusetts Nurses Association and National Nurses United.

There was a one-day strike at the facility on October 2012 and Baystate Franklin Medical Center nurses are considering striking again.

“We don’t want to strike, we want to negotiate, but we may be left with no other option since Baystate shows no sign of wanting to negotiate in good faith,” said Judd.

A key issue in the dispute is daily overtime pay for consecutive hours worked beyond a standard 8 to 12 hour shift.  The hospital estimates that eliminating daily overtime pay would save it $80,000 per year. The Massachusetts Nurses Association puts the actual figure at $60,000 and notes that “the annual overtime costs for all 200 BFMC RNs is roughly equal to one week of Baystate Health CEO Mark Tolosky’s pay and benefits.”